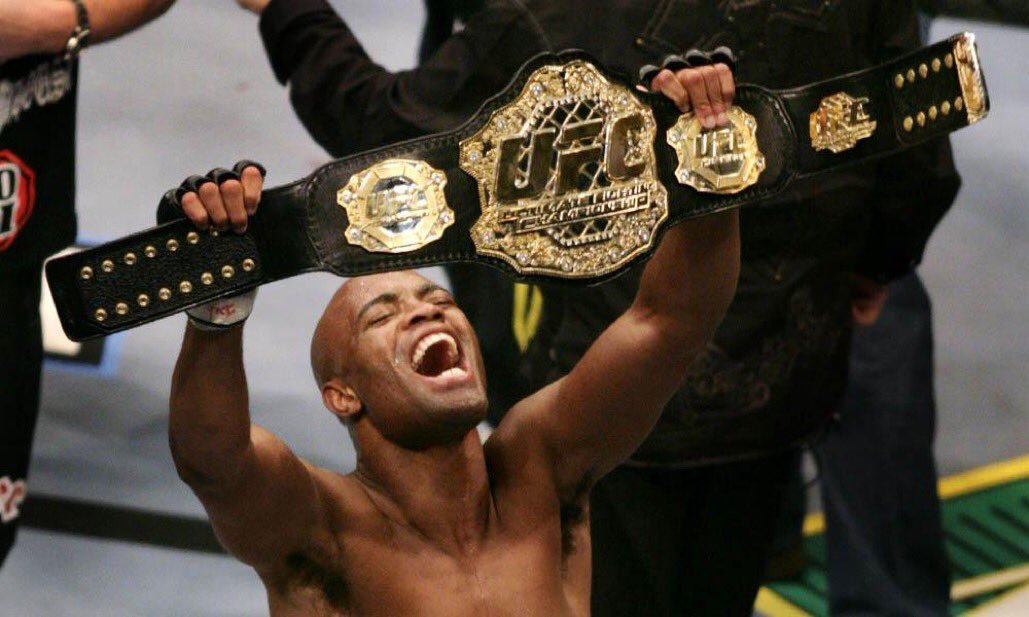 Anderson Silva is undoubtedly one of the living legends of MMA and The Spider has clearly marked the history of the sport. After a mixed start, he became the UFC middleweight world champion, and held his title for 7 years, from 2006 to 2013. He is considered one of the very best fighters in history, any weight. confused, having walked the UFC Octagon.

Anderson Silva born in Sao Paulo in 1975, in a very modest family. His mother is too poor to raise him and his 3 brothers and sisters, so she decides to send him, with his older brother, to Curitiba, to the oldest of the siblings.

Silva was then 4 years old, and he followed some friends in the Brazilian Jiu-Jitsu club in the neighborhood. However, his big sister and his companion do not have enough means to pay for the lessons, and he will have to wait 8 years, until he is 12, to join a Taekwondo club. He is gifted, and he gets his belts quickly, to become a black belt at 18 (now 5th Dan).

If Taekwondo is his discipline of choice, he is interested in other combat sports. He thus practiced Thai boxing, then judo where he became a black belt, then later Brazilian jiu-jitsu (3rd degree black belt in 2005) and even capoeira where he reached the “yellow rope” in 2010.

Before 1997, he was unprofessional, and he had to earn a living. He then worked as an archivist, or as a waiter at the cash desk of a McDonald’s. Despite his consuming passion for combat sports, he still has time to take care of Dayane, his wife, with whom he will have 5 children, 3 sons and 2 daughters.

His MMA pro debut was in 1997, at age 22, on his land in Brazil. He participated in the Brazilian Freestyle Circuit 1. He eliminated Raimundo Pinheiro in less than 2 minutes by a submission in strangulation for his first fight. For his second fight, he meets Camões, a protégé of the Gracie family, a specialist in Jiu-jitsu. This fight lasts 25 minutes, Silva manages to stay upright so as not to suffer the techniques on the ground of his opponent, who will end up bending under the kicks of Silva, declared the winner by TKO.

We start talking about him, and Japan offers him to come and fight at the Shooto, a very popular free fighting tournament in the land of the rising sun. He will win his first fight and boost his reputation. He then continues 6 wins, before being able to meet Hayato Sakurai, the middleweight champion of the Shooto, who is a fighter recognized worldwide. This is the biggest challenge faced by Silva in her young career. The Spider hits hard and wins by unanimous decision, with very good ground play, against an opponent who is particularly proficient in judo.

He can then write on his business card that he is the first man to beat Sakurai, and therefore the brand new Shooto middleweight champion.

Being a Shooto champion, Anderson Silva can no longer be ignored by anyone in the small world of MMA. He then signed his first big contract with the Pride Fighting Championships (PFC), which at the time was the biggest MMA organization in the world.

It all started very well, with a TKO victory over Alex Stiebling in his first fight, followed by a unanimous decision for Silva against Otsuka in the second fight. However, they are 2 fairly average fighters, having more defeats than victories.

He then meets a more serious candidate, Carlos Newton, a Canadian former PFC light heavyweight champion. Silva is in trouble on the ground, but he doesn’t let go. He manages to get up, and sends a jump knee to the chin of his opponent who bent down to try to send him back to the ground. The blow is terrible and The Spider wins by KO. He ends by dancing in the middle of the ring, imitating Michael Jackson.

For his fourth fight at Pride, Silva is confident. He must fight Daiju Takase who has won only 4 of his last 12 fights. Badly prepared, he will undergo the attacks of the Japanese, who manages to take him to the ground, to put him on his back and to strangle him. Silva has no choice but to give up.

This defeat was a real blow for him and for his “Chute Boxe” team. Rudimar Fedrigo is the boss of this team and things are not going very well with Silva anymore. The latter is forced to leave the Pride Fighting Championships, and he even thinks of stopping his career. Fortunately for the legend, his friend and partner Antônio Rodrigo Nogueira, pushes him to continue.

Silva then trains with the “Brazilian Top Team” and the Nogueira brothers, who were the main rivals of Chute Boxe. Very quickly, Anderson Silva built his own team: The “Muay Thai Dream Team”.

Outside of the PFC, Silva has to fight in smaller organizations. He then joined Cage Rage, the English organization which brought together some very good fighters. With his track record, Silva is offered the opportunity to immediately fight for the vacant middleweight belt. He meets Lee Muray and wins his fight by unanimous decision, he is already the new champion of Cage Rage.

He is invited for a new fight at the PFC, against Ryo Chonon. The fight is very close, but on the ground Ryo is better. He defeats Silva with an ankle wrench which forces the Brazilian champion to abandon.

Back at Cage Rage, Silva returns to victory by sending Jorge Riveira to the mat, then defeating again by KO Curtis Stout.

Unbeaten in Cage Rage, Silva is looking for a challenge, and a new belt. He then took part in the “Rumble on The Rock” tournament, with a difficult first fight against the Japanese Yushin Okami. Silva controls the fight well, but is surprised and finds himself on the ground, on his back. He then sends a heel kick to the face of the Japanese who is almost knocked out. The blow was not authorized and Silva is disqualified.

In 2006, Silva made his last fight in Cage Rage, against a rather average fighter, Tony Fryklund. The fight is too easy for Silva, who wins by KO with a magnificent nudge.

The UFC, to write the legend

The American UFC organization grew in 2006, and Anderson Silva decided to join it. His first fight promises to be difficult, against Chris Leben, a very popular American who is undefeated in the UFC, after five wins.

Very quickly, Silva gains the upper hand and rains a shower of blows. Leben is having a hard time fighting against the speed of the Brazilian. A final knee kick sends the American to the ground after less than a minute of fighting. Silva is in the UFC and the American public has really just gotten to know him.

As was costme at the time, the UFC is launching a poll to ask netizens who Silva needs to meet for his next fight. The middleweight champion Rich Franklin is then called upon. He is undefeated in 7 fights and he has already defended his title twice. A great fighter therefore, who is however very quickly outclassed by Silva who will knock him out in less than 3 minutes.

Silva is the new middleweight champion, and he will reign supreme for 7 years. He will notably break Royce Gracie’s record by winning 16 consecutive fights from 2006 to 2012. Silva also holds the most title defenses in the UFC, retaining his belt 10 times. He is also the record holder for the longest period as champion, with 2457 days.

For Dana White, the president of the UFC, Silva is “the greatest MMA fighter of all time”.

A complicated and criticized end of career

In 2009, Silva was unchallenged, but began to come under fire after a fight against Thales Leties which he won by unanimous decision. This is the first time since joining the UFC that The Spider hasn’t finished a fight before the limit. We mainly talk about a lack of respect for the fight and the opponent, with a Silva who dances, lets down his guard and provokes his opponent.

This behavior had already been reported during a previous fight against Patrick Côté. Part of the public is disappointed by these provocations and even Dana White criticizes the champion. That said, Silva will continue to win and break records until 2013.

He then meets Chris Weidman and as usual, Silva provokes, dances and lets down his guard. Except this time, one provocation too much costs him dearly, and he receives a violent left hook from Weidman which sends him to the ground. The fighter does not need to be asked to finish off his opponent and put an end to Silva’s invincibility in UFC.

A rematch is scheduled almost 6 months after the defeat of Silva, who this time takes the fight more seriously. Unfortunately for the Brazilian, the latter breaks his leg against that of the American. The injury is terrible and Silva is over 39 years old by then. The small world of the UFC whispers that Silva will not return to the ring again.

However, he will resume training faster than expected, and even signs a contract for 15 more fights with the UFC. The Spider returned to competition in January 2015, against Nick Diaz. He won the fight by unanimous decision, but tested positive for a doping product for the first time in his career. He will then be suspended for 1 year from any competition. In 2016, he entered the octagon once again, and he will only experience one victory in 5 fights. As of this writing, The Spider is 44 years old, and he hasn’t decided to hang up his gloves yet.

We use cookies to ensure that we give you the best experience on our website. If you continue to use this site we will assume that you are happy with it.Ok